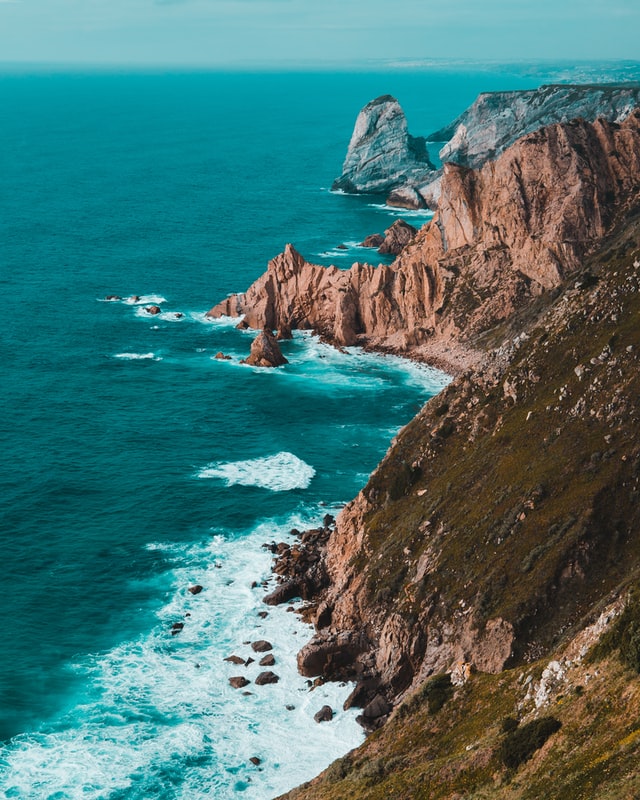 When you think of the best hiking adventures in Europe, your imagination might transport you to the volcanic landscapes of Iceland, the rugged terrain of The Alps or even a bit closer to home in the great Scottish Highlands.

While it’s usually overlooked as an obvious trekking destination, hiking in Portugal will see you traverse some of the most remarkable and underrated trails on the continent. If you’re ready for some unforgettable scenes and an adventure of a lifetime, here are some of our favourite Portuguese routes.

From the limestone of the Algarve, the jagged cliffs of Cabo Saint Vincente and the coast of Cabo da Roca, the varied landscapes means there is a hike to suit everybody. Whether you want a day hike, a 7-day adventure, a slow-paced stroll or an intense clamber, your options are endless when hiking in Portugal.

If you want to enjoy a week hiking in South Portugal, there's no need to look further than The Rota Vicentina.

The Rota Vicentina is a bundle of some of the world's most beautiful hiking trails. The hikes originally spanned from the Alentejo region to the Algarve, but they were extended as of this year - 2020 - meaning you can now hike from Cabo de Sao Vicente, through to Lagos.

Due to the span of the trail, it would take you around two-weeks to travel from one end to another. While many nature lovers choose to explore the route in its entirety, there are a number of picturesque self-contained routes that are perfect if you have less time to explore.

Two of Rota Vicentina's major multi-day trekking routes are the Fisherman's Trail and the Historical Way.

The Fisherman's Trail is a coastal hiking trail, and one of the most exquisite coastal hikes in the world. The trek starts in Porto Covo in Alentejo and runs through to its end in Odeceixe in the Algarve coast. You will ramble a rugged coast, meander through quaint villages and get to see the Fisherman's Trail iconic lighthouse in all of its glory.

The Fisherman's Trail usually gets all of the glory of  Rota Vicentina, but the Historical Way is up there with the best. In contrast to beaches and calming ocean, the highlights of this route are creeks, traditional farmland, white-washed towns and oak forests, all while soaking up and learning about the history of the region.

Whether you're opting for the Fisherman's Trail, the Historical Way or fancy the entire hike from North to South (or vice versa), we recommend visiting The Rota Vicentina in Spring, when the trees and flowers are blooming and the temperatures less intense for a long trek.

The Seven Hanging Valleys Trail is the definition of natural beauty, or should we say - nature CREATING beauty. The caves are captivating natural formations, created through corrosion from the choppy waves of the Atlantic ocean.

The route is in the Algarve and since the trail is only 12km, it is one of Portugal's most popular day trips and the hike takes approximately four to six hours.

Whether you start the end Praia da Marinha or at Praia de Vale Centianes, you will pass through 'seven' different, yet all equally fascinating caves. Some of the Seven Hanging Valleys Trail highlights include Corredoura Beach and Carvalho Beach, however, Benagil Beach is the real star of the show.

The sandstone cave with a naturally-formed skylight is one of the most stunning sights in the region, and if your time allows, you can enjoy the boat tours or spend the afternoon on a rented paddleboard or kayak to transport yourself from the Benagil Beach to the beauty of the cave.

Trilho da Cidade da Calcedonia is a day hike in the country's National Park, Peneda-Geres. The trekking route in North Portugal is more relaxed than many other spectacular trails in terms of terrain, but it will still take four to five hours, meaning you will still get to enjoy a full day in nature.

Peneda-Geres National Park is largely unexplored compared to many of the other options, but we can't figure out why? The views on the routes are breathtaking, consisting of rolling hills, forests of pine and oak, green fields and traditional Portuguese villages where you can sample some of the country's finest cuisine and wine.

The routes are open all-year-round, summer is the most popular with hikers due to the almost guaranteed high temperatures. However, if you prefer to stay active in slightly cooler temperatures, the climate throughout spring and autumn is also fantastic.

Islands of the Azores

Something a little different now, just off mainland Portugal is the beautiful and diverse Islands of the Azores. The Azores is one of two autonomous regions of Portugal and comprises nine unique islands; São Miguel, Pico, Terceira, São Jorge, Faial, Flores, Santa Maria, Graciosa and Corvo.

Each of the volcanic islands has fantastic hike routes, so you really are spoilt for choice. You can choose to spend a day on each and you would never be short of a stunning trek route to venture down. São Miguel is the most well-known of the Azores islands, but São Jorge might just be our favourite... just.

São Jorge every so slightly takes the crown, partly for the central mountain range that runs the entire length of the island, partly due to it being far less populated than the more popular islands and partly due to its fajãs. Fajãs are plains that were formed by landslides or lava flows down the cliffs, and they all contain minute villages that are largely accessible by walking trails only.

Serra da Arrábida is a natural park in south Portugal and is up there on the hot-list with the country's most stunning coastal hiking routes.

Some highlights of the Serra da Arrábida hike are the Cabo Espichel, the mountain top of Serra do Risco, another iconic lighthouse and a slurry of hidden turquoise sea beaches, coves and rugged limestone coastal cliffs.